Al Hajja Al Hadaouia (sometimes transcribed Al Hajja Al Hamdawiya) is a Moroccan singer born in 1930 in Derb Sultan, a famous working-class neighborhood of Casablanca. Her father's love for music will serve as a guide and inspiration. In this regard the artist states: " It was my father who infected me with the virus of music and dance, he constantly asked me to sing and dance. "Paradoxically, the parent will be the one who will most strenuously oppose his daughter's musical career : "He was scared for me" says the diva who will challenge her family at the risk of being repudiated, supported by her aunt who will intercede with her parents to let her express her talent. The first steps in the world of entertainment the young Hajja moves them in the field of theater. In fact, she joins the Bachir Laâlej theater company comprising Bouchaïb Bidaoui, Ahmed Souiri, Kadmiri Lahbib and Mfaddel Lahrizi. She will be one of the first theater actresses in Morocco in a historical moment in which even female roles were played by men. Little more than a teenager and short of experience Haja Hamdaouia will find herself catapulted into a world bigger than her: "I didn't really know where I was going, they offered me to play and sing, I threw myself into it with my eyes closed" she will remember. Carrying out this artistic activity she will be noticed by El Ma’ati El Bidaoui, one of the precursors of the modern Moroccan Andalusian song, who, sensing the rich potential of her voice, will offer her a place as a singer in his orchestra called "Al Kawakib". 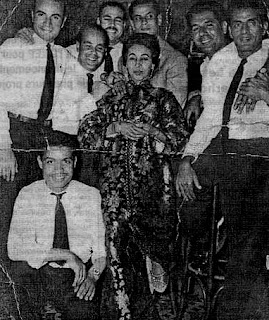 Thus begins what can be identified as the golden age of this artist. Artistically, al Hajja Al Hamdaouia will initially devote herself to the poetic tradition of Aïta Marsaouiya (from the term Marsa, which can be translated with the word harbor), a musical form typical of the Casablanca region, historically exclusive prerogative of the male gender. The singer will modernize this tradition by inserting Chaabi and Gharnati elements within it; she will also contribute to the renewal of the orchestra's composition, combining traditional elements with modern instruments such as saxophone, organ, guitar, drums and violin. The originality and high artistic quality of the musical proposal by Al Hajja Al Hamdaouia and her orchestra will lead her to perform at the famous club "Le Coq d'Or", opened in 1949 by the famous Algerian singer Salim Hilali at the old medina of Casablanca . "Le Coq d'Or" with its six halls adorned with gilded curtains and Louis XV style furniture was one of the most sumptuous cabarets in the city. It regularly hosted renowned artists from all over the Maghreb area and was a very popular place. During her stay at "Le Cod d'or" Al Hajja Al Hamdaouiawill share the stage with artists such as Maâti Belkacem, Line Monty, Blond Blond, Lili Boniche, Chafia Rochdi, Latifa Amal, Warda Al Jazairia and Raoul Journo establishing an excellent relationship of friendship with the owner Salim Halali who will affectionately call her "Binti" (my daughter). In reference to those years the singer will say: “Salim was more than a friend, he was a brother. He taught me everything: how to dress, how to stand on stage, how to sing. In short, how to be respectful and worthy of respect, and finally how to be proud of my work ".

In a nation still under French domination and in a well-meaning society still bound to rigid patriarchal schemes that very often judged public performances as amoral, Al Hajja Al Hadaouia stands out as one of the freshest voices in music of the time. The Aita genre revised and modernized by her, which has always been associated with eroticism and sexuality, asserts itself in Moroccan society by consecrating the singer as a true diva.
"We must not see Aita as something immoral" says the singer. "It is a legacy that must be preserved. As far as I'm concerned, I've never played on eroticism and sexuality. My songs are mainly about love. Love and politics ".

It will be the political component of her texts that will create many problems for her.

The persistence of the French occupation that began in 1912 favors the birth of a strong nationalist movement. The singer, young and rebellious, provided her contribution to the national cause both materially (she remembers in fact having driven through the cities carrying weapons hidden under her stage clothes to defend the country), and using her art.

In 1953 following the exile of Mohammed V, Mohammed Ben Arafa, the new puppet sultan wanted by the French administration, ascended the throne (the title of king was introduced in Morocco only in 1957). The fact had a strong impact on all Moroccan society. Al Hajja Al Hadaouia wrote and performed a piece called "Willy Ya Shaybani" in which he targeted the colonial power and openly mocked the new sultan. The song will spread throughout the country and the singer will be forced to live in hiding before being arrested. Once released, she will choose exile and move to Paris even if years later she will minimize the events by stating: "I went to Paris to find the man I loved".


Once she arrives in the French capital, Al Hajja Al Hadaouia will come into contact with a Moroccan nationalist, also an expatriate, who will get her various jobs at clubs such as Chez Maxim and Saint Paul. She will meet the singers Ahmed Jabrane and Mohamed Fouiteh. The latter will perform the song "Au Maloulou".

Over time she will be an active part of the French Arab scene alongside artists such as Raoul Journo, Ali Riahi, Maurice Mimoun, Samy El Maghribi, Albert Souissa and Hadi Jouini (the latter author of the text of the famous song "Ya Rayah", brought to success by Algerian musician Dahmane El Harrachi).

She will perform frequently in local Arab cabarets in vogue at the time. Places such as Koutoubia, La Kasbah, Layali Loubnan and Tam Tam, owned by the father of Warda Al Jazairia, her friend and colleague.

The French exile will have a positive effect on the artist's creativity, enriching her repertoire and making it appreciated by an ever-growing audience.

With independence in 1956 and the return to the throne of Mohammed V, homesickness brought her back to Morocco. 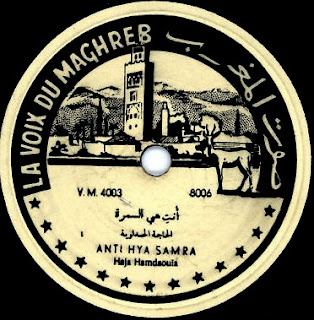 The 60s and 70s will be the harbingers of great satisfaction. She will record for the largest Moroccan record companies of the time and will take part in various concerts, public and private, in festivals and events.

Musically, she will allow herself excursions in the field of Mawwal gharnati, Algerian and Tunisian song, Arab / Jewish tradition and flamenco. The sobriety of her concerts and her naturalness (as well as her splendid voice) will make her loved by the Moroccan public who will admire her in ecstasy on the national television channel.

Her interpretation on public television of the song "Mnin ana wa mnin inta" will remain in the collective memory of Morocco for many years, as well as songs such as "Mama hyiani", "Ayamna", "Al aar, al aar", "Salba, salba "and" Jilali bouya ".

In many respects it can be said that Al Hajja Al Hadaouia was one of the most important female figures in Moroccan music of the last century. Together with musicians such as Houssein Slaoui, Bouchaïb Bidaoui and Jacob Botbol, she was the architect of the urbanization of the rural song of the Atlantic territories, allowing it to be spread nationwide. Her stage presence and her approach, serious and natural, allowed her to win the hearts of the audience while interpreting powerful texts through which she openly expressed her be female spoke openly about sex and love. If, in the musical field, her great contribution to the rehabilitation of the Aita genre must certainly be recognized, her influence in the social field has been equally great.

As Rabah Mezouane, a prestigious musicologist at the institute du monde arabe in Paris, states: “Al Hajja Al Hadaouia 's musical journey, her songs and her impertinence, have made her a symbolic figure who paved the way for women to regain right to freedom of expression ".


Very little is known about her private life, studded with great passions kept secret, but her solid friendship with Cheikha Remitti, a well-known Algerian singer, with whom her shared many passions, is well known. Both proud and independent women, capable of great voluptuousness and great dedication to pleasure, both very devoted in the religious and social fields. In fact, Al Hajja Al Hadaouia will adopt ten children during her existence.

A certificate, dated 25 November 1977, from the royal cabinet and signed by Ahmed Bensouda, High Commissioner for the Resistance and advisor to King Hassan II, will recognize the patriotic value of the singer's deeds during the French protectorate, in reference to her imprisonment and her support for Mohammed V during his exile. Paradoxically, after this honor, the artist's star seems to decline.

The 80's and 90's will be for her a long ordeal marked by great privations.

As rich and flattered as she was, she will suddenly fall into anonymity and end up living in a small room in Paris supporting herself on the few and miserable contracts she will be able to obtain and the charity of some friends. Sh will have serious health problems and end up living in misery.

"It was very difficult" she will say "But every experience is a beautiful experience. I have had ups and downs, great ups and great lows, but this is what makes me the strong woman I am!". 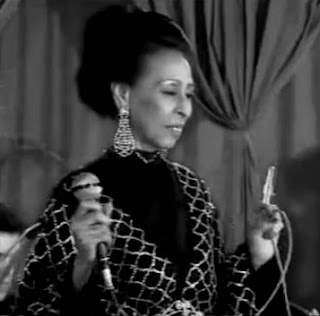 With the ascension to the throne of Morocco by Mohammed VI in 1999, the singer's fate will turn to the best again. Within the renewal program of Moroccan society undertaken by the new sovereign, a large space will be occupied by the recovery and enhancement of the country's artistic tradition.
Al Hajja Al Hadaouia as a true legend of the Moroccan music scene will benefit from this project and King Mohammed VI will take a personal interest in the condition of the singer.

The return to the scene will see her acclaimed as a jewel of national tradition and will be able to live a new life under the limelight.

It will perform throughout Morocco and Europe in large concerts that will consolidate her status as a living national monument. In some events she will meet her old friend Cheikha Remiti and will perform in the company sof the king of Rai Cheb Khaled

At the age of seventy-seven years after decades of recording silence, he will release an album in the company of the group Oulad El Bou’azzaoui, a zealous guardian of tradition, re-proposing some great classics of the Aïta Marsaouiya repertoire.

The whole of Morocco experienced moments of concern in 2008 when the singer was hospitalized at the age of 78 for problems related to hypertension and fatigue. "It was a breakdown" the singer will say, "I gave 43 shows in one year."

In 2018 Al Hajja Al Hadaouia still managed to perform in some amazing concerts. Among these it should be remembered her performance at the 15th edition of “Andalousies Atlantiques” in Essaouria in the company of Raymonde El Bidaouia during which she demonstrated that despite her eighty-eight years she is still the queen of Moroccan music. 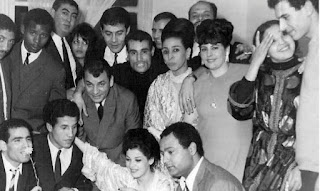 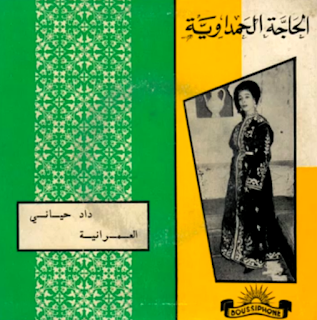 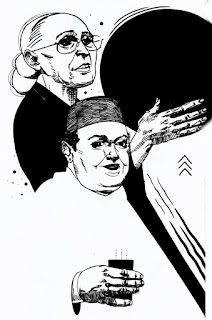 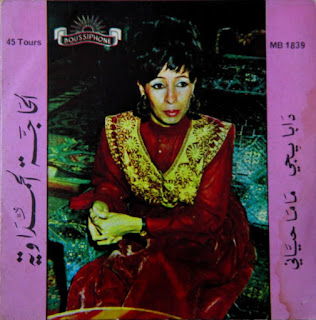 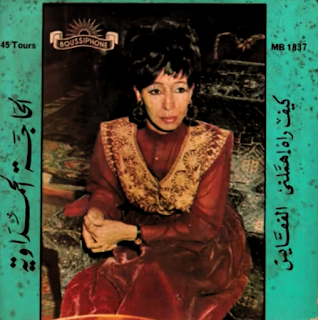 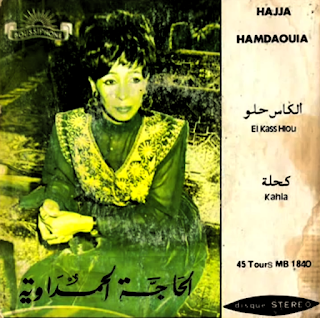 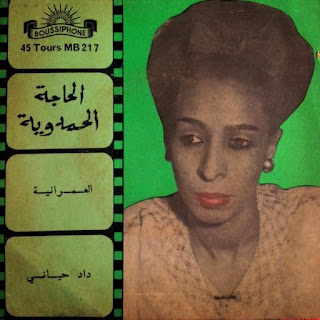 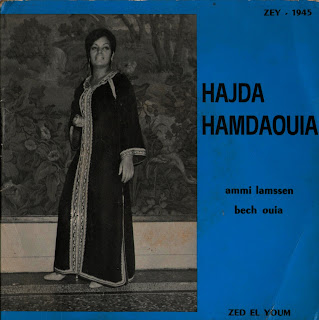 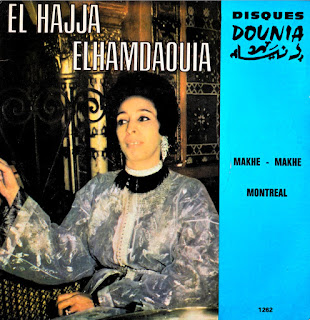 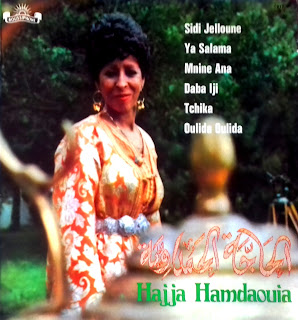 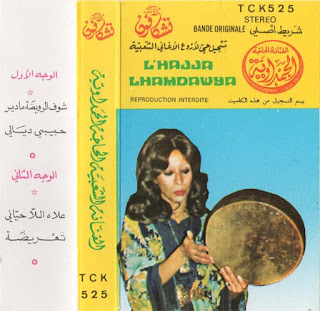 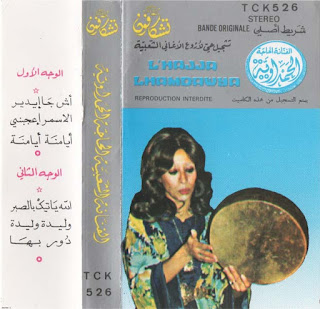 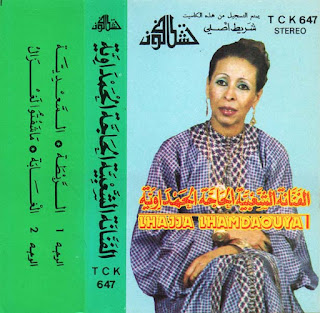 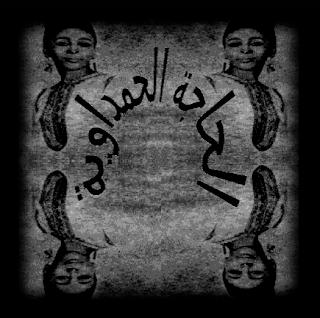 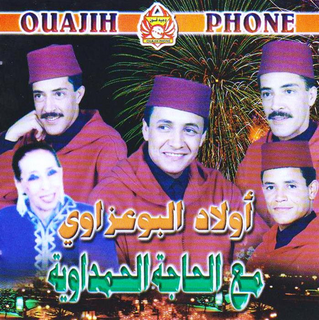