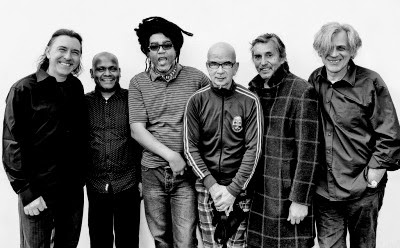 Dissidenten are a German rock band known for their collaborations with Middle Eastern, African and Indian musicians. In a 1988 article for The New York Times, music critic Stephen Holden acknowledged the band as being among the leaders of what he termed "the 'world beat' movement ... in which ethnic styles are contemporized with electronic dance rhythms"-

Following a one-year tour of Asia, the group decided to stay in India to produce their first album Germanistan, with the help of the Karnataka College of Percussion, female singer R.A. Ramamani and percussionist Ramesh Shotham. The live line-up was joined by Indian pianist Louis Banks and American saxophonist Charlie Mariano. Concerts in Calcutta, Madrid, Casablanca and Stockholm are documented on the live album Germanistan Tour 83.


1984/85: Concerts worldwide. Having toured North Africa, Dissidenten set up camp in Tangier, Morocco. Composer and author Paul Bowles and Tangier’s musical godfather Abdesalam Akaaboune introduce the group to Moroccan musicians Jil Jilala, Nas El Ghiwane, Lem Chaheb and the like. Dissidenten’s third album SAHARA ELEKTRIK is recorded in Tangier with Lem Chaheb and their outstanding leader Cherif Lamrani. FATA MORGANA – the album’s hit song becomes famous not only in North Africa but as a top dance floor success in Europe and South America. 250,000 people see and hear Dissidenten live during a three-week tour of Spain. British DJ, John Peel, features the group in his legendary BBC program. ‘Dissimania’ -initially started out in the Mediterranean basin and spreads via England to Canada and the US. Dissidenten make it to the top of independent charts worldwide. Concert for German TV-WDR at the famous Rock Palast is televised live all over Europe.

1986/88: Concerts worldwide. Dissidenten move to Spain. The album LIFE AT THE PYRAMIDS is recorded in Madrid, Tunis and Tangier and includes Dissidenten’s hit song and video clip TELEPHONE ARAB. With a cover version of Telephone Arab, Egyptian superstar Mohammed Mounir makes it number one all over the Arab world. Dissidenten tour major places in Europe and North America as well as North Africa and Asia. One of these legendary concerts at New York’s packed Palladium is recorded for the album DISSIDENTEN LIVE IN NEW YORK. The song Fata Morgana from the 1984 album Sahara Elektrik becomes a major hit in Brazil and South America. 10 years later it will have sold more than 1.5 million copies in Brazil alone. Dissidenten play the title song for the famous tele novela Sassa Ricando. Today Dissidenten still enjoys a strong following in Brazil.

1989/91: Morocco: Recordings with the Royal Orchestra of Rabat for the album OUT OF THIS WORLD, featuring singer Mahmoud Saadi of Morocco’s legendary Nas el Ghiwane and the incredible talents of Cherif Lamrani on mandolin cello. 1989 OUT OF THIS WORLD is released worldwide. The video for the album’s title song was filmed and produced by Dissidenten in East Berlin – just before and during the time the Berlin Wall came down. Concerts in North America follow and Dissidenten start recording for the yet unpublished album REAL AMERICAN MUSIC in the Five Nations Indian Reserve near Toronto. The album includes Native American Indian musicians with whom the band became friends and worked with while touring Canada.


1992/95: Concerts worldwide. Recordings in Mumbay Bangalore for the album THE JUNGLE BOOK – an artistic reunion with many musicians and friends from the group’s past years working and touring all over India. Most of them have become internationally acclaimed by now. Ramesh Shotham, R.A. Ramamani, Karnataka College of Percussion, Louis Banks and Trilok Gurtu to name a few. European radio DJs vote Dissidenten second place amongst 800 albums in their annual European World Music Charts. DJ Sven Väth remixes the single-release JUNGLE BOOK PART II from the THE JUNGLE BOOK and thus introduces the “Love- and Trance-Generation” to Dissidenten.


2000: Dissidenten are exploring yet another musical world. Teaming up with composer, Gordon Sherwood, and video artist, Stefanie Seidl, they create the “Documentary Opera” THE MEMORY OF THE WATERS, first performed at “Internationales Donau Festival Ulm” for German National Radio SWR by the Bratislava Sinfonic Orchestra & Choir: Director, Peter Feranec, and featuring Charlie Mariano, Noujoum Ouazza, Manickam Yogeswaran, Barbara Buchholz and Tomás San Miguel – more than 100 musicians on stage. Between 2000 and 2005 THE MEMORY OF THE WATERS is performed by various orchestras all over Europe. LA MEMORIA DE LAS AGUAS, the Spanish version, is performed with conductor Tomás Garrido and the Orchestra & Choir Pamplona for the Festivales de Navarra – broadcast by Spanish National Radio live nationwide. World Exhibition Expo 2000 Hannover: In collaboration with German sculptor Albert Hien, Dissidenten compose and perform a piece for 96 Bavarian brass bands and a sound installation incorporating the sound of bells from 96 different Bavarian cathedrals and churches.

2001/05: 20 years around the world: Dissidenten once again call upon friends and collaborators to celebrate the anniversary. The album 2001: A WORLD BEAT ODYSSEY, gathers some of Europe’s most famed DJs: Badmarsh, Tricatel, Ravi Bal, Shantel, Deep-Dive-Corp, Lelonek, Kulisch & Vana and Slop Shop to remix nine tracks from almost all musical phases of Dissidenten. In 2003 the remix collection is completed with the album DISSIDENTEN REMIX.ED 2.O: A NEW WORLD ODYSSEY. At Womex 2001 in Rotterdam Dissidenten present their project IN 80 NIGHTS AROUND THE WORLD – including various DJs, VJ Annahd and Andreas Leifeld, which later is performed live all over Europe.


2006/07: Dissidenten are touring North Africa with Moroccan heroes Jil Jilala. Between concerts they work together in Tangier and Casablanca to complete the new DISSIDENTEN//JIL JILALA album »TANGER SESSIONS«. 2007: The band composes and arranges the musical program at the final party of Germany’s spectacular CREOLE-Award for World Music. French/German TV ARTE and German TV WDR broadcast a lengthy feature about Dissidenten’s Moroccan experiences


2008: The album »TANGER SESSIONS« is released. Concerts in Europe and North Africa from April onward. The debut concert in Germany is broadcast live and online by German National Radio SWR in April 2008

2009: Dissidenten tour Europe from Finland to Spain with »TANGER SESSIONS«. The line up includes guitar heroes Roman Bunka of Embryo / Mohamed Mounir and Henning Rümenap from the Guano Apes.

2011: The band is on the road in Europe and Morocco. In Casablanca, Fes and Rabat they reunite with Morocco’s cult band Lem Chaheb, with whom in the 80s they shared the worldwide success of the ground breaking album SAHARA ELEKTRIK. In July Dissidenten are headlining Portugal’s prestigious Sines Festival, in August they play in England at Peter Gabriel’s legendary Womad Festival. The concert is broadcast live by BBC. In fall the band returns to Morocco for more concerts.

2012: Dissidenten receive Germany’s prestigious ‘International Praetorius Music Peace Award’. They were asked to put together a live acoustic set for the occasion, taking a retrospective look back over the band’s unique history. This gave them the idea of doing a tour featuring unplugged versions of their greatest hits. One concert was recorded and broadcast by the German National Radio. The rest of the year they appeared at various Festivals in Europe.


2013: On the final date of the tour which mainly included Portugal, Morocco, Austria, and Germany, the trio record a spontaneous concert for friends on the banks of Berlin’s River Spree, along with musical guests who have been part of the long Dissidenten story. This led to the production of the album HOW LONG IS NOW? – Dissidenten Unplugged Live in Berlin, which presents another unexplored perspective of the group. Since they have been a Berlin band from the beginning, this album is also an homage to their home town.

2014: Except for occasional festival appearances (i.e. Bundeskunsthalle Bonn Festival) Dissidenten spends the year mainly working on the album THE MEMORY OF THE WATERS – Dissidenten by Gordon Sherwood recorded live at the Bruckner Festival Linz/Austria. Back in summer 1997 Dissidenten met the American composer and world traveller Gordon Sherwood in Tanger/Morocco brought together via their mutual friend writer/composer Paul Bowles. A new and inspired friendship began. The Memory Of The Waters bears witness to the years Dissidenten and Sherwood spent travelling and working together.


2015: Sees Dissidenten on tour – together with their long time friend Mohamed Mounir- at various Festivals in Europe (Afrika Festival Würzburg, Vienna and Munich as well as the Nuremberg Bardentreffen with more than 240,000 spectators). For many years Dissidenten and Mounir have been close friends. He has played and recorded a variety of their songs and Dissidenten’s guitarist Roman Bunka has been a member of Mounir’s band since the 80s. In 2015 they are joining together live on stage. Mounir is an iconic Egyptian singer and film star. From Alexandria to Aswan, the voice of Mohamed Mounir is as familiar to Egyptians as that of a brother or father or closest of friends. His warm, sweet contralto is an integral part of Egypt’s soundscape, blasting day and night from countless CD-selling kiosks, sidewalk cafés and automobiles

In November 2015 Dissidenten headline at the German “CREOLE“ meeting in Karlsruhe, shortly after they performed a sold out concert in their old adopted hometown Tangier and at “Visa For Music“ in Rabat, Morocco where they were granted the “VISA FOR MUSIC-AWARD“ as an hommage to their inspired collaborations with Moroccan musicians. As the Jury states: “Modern Music in Morocco began over thirty years ago with Dissidenten“.

The realization of this post has been possible thanks to the great job of Reda Boudemala which has recovered all the  albums of the group . 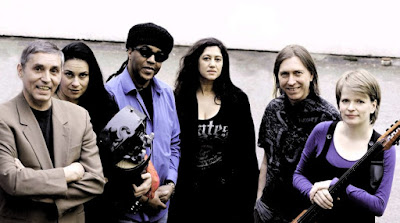 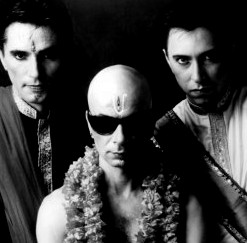 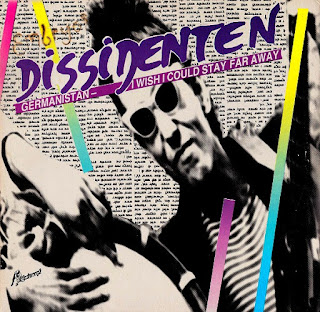 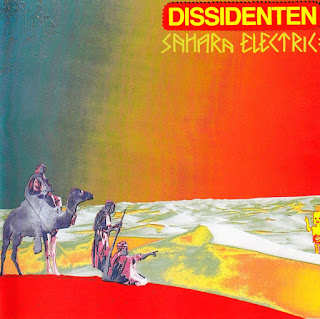 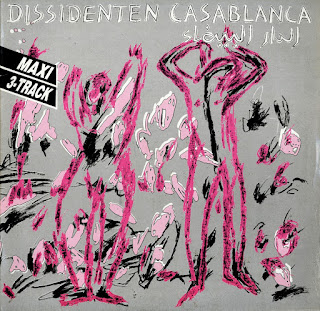 
Dissidenten ‎– Life At The Pyramids 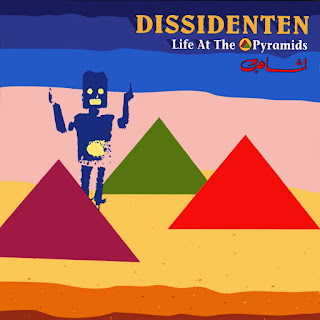 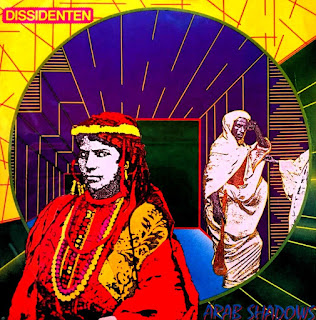 
Dissidenten ‎– Out Of This World 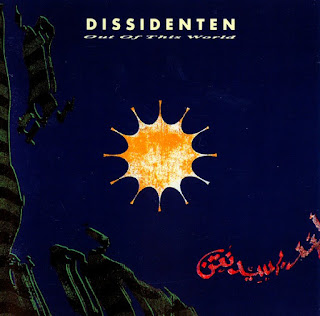 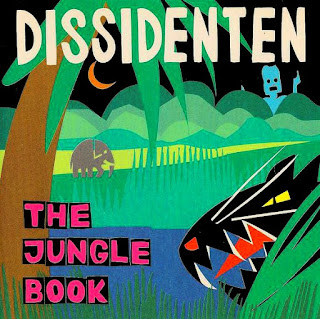 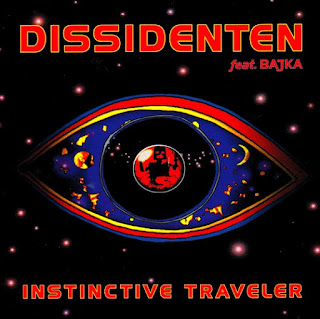 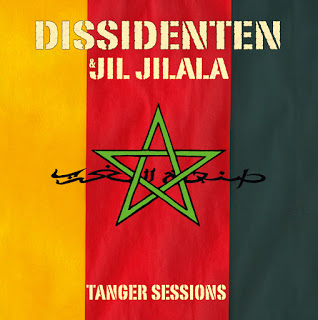 Dissidenten ‎– How Long Is Now? - Unplugged Live In Berlin 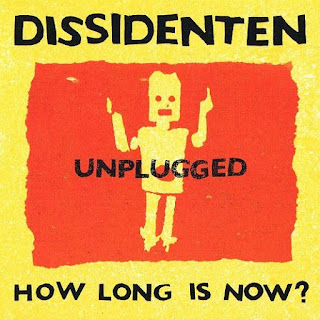