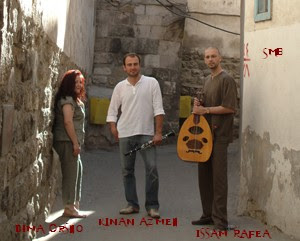 The members of the ensemble are clarinetist Kinan Azmeh, oud soloist Issam Rafea, classically-trained soprano Dima Orsho, Khaled Omran (bass), Simon Mreach (drums), Badi Rafea ( percussion) all of whom are alumni of Solhi Al-Wadi's Syrian National Symphony Orchestra. All members are Syrians, though some live outside the country.

Hewar was unveiled with a concert that took place in the historical setting of al-Zaytuna Church in Damascus' old city in September 2003. The venue was packed to maximum capacity with 1,500 people, all of whom came through word-of-mouth to witness this event. The concert was such an immense success, and created a positive buzz for the band, leading to a follow-up and equally successful concert at the American University of Beirut (AUB) in January 2004, under the auspices of the Syrian Club.

In February and March 2004, Hewar, sponsored by the Syrian Embassy in Washington, and several NGOs promoting cultural understanding, such as the Middle East Institute, toured 10 US states, performing in packed venues as prestigious as MIT and the Kennedy Center to standing ovations. They later played one concert in Cologne, Germany in late March 2004 to a receptive and eminent audience, and in London. They also performed in Opéra Bastille in Paris, and in Tokyo jazz venue, the Shinjuku Pit Inn.

Hewar released their first album in December 2005 in Beirut and in January 2006 in Damascus, the launch of the album was very successful, and the album produced by La CD-Theque .

In collaboration with the three members of the German Manfred Leuchter jazz quarter: accordeonist Manfred Leuchter, Steffen Thormählen (percussion) and Antoine Pütz (electric bass, guembri) Hewar performed two concerts in Damascus in July 2006 and one concert in Marseilles in Oct 2006. This collaboration resulted in Hewar's second album 9 Days of Solitude in July 2007.Hewar's music brings together a diverse musical influences, and draws from many musical traditions—namely Arabic, jazz, scat singing, opera and classical music; which makes it a unique venture. The band, building on the individual talents of each of its members, juxtaposes and meshes these musical styles seeks to create genre-breaking music.

Hewar's members claim that musical personality, rather than an instrument driven approach, justifies the eclectic line-up of oud, clarinet, and soprano, emphasizes the ability of music to express a wide scope of human emotions and makes for a distinctively unique sound, a sound that allows for an open-ended "dialogue" (hence the name Hewar) between Arabic music, jazz and western classical melodies.Accourding to the band's website they seek to transcend the barriers of cultural disparities and misconceptions, and establish a civilized communication which builds on what brings humans closer together rather than separates them. This is achieved through a unique musical exchange between different musical personalities (using each individual instrument as the only means of this musical communication), reflecting an approach that is as musically-based as much as it has social and political references and subtexts.

Because today's world is growing ever closer, and cultural barriers and misperceptions should be coming down at an ever-increasing pace. In these iconoclastic times, communication and understanding constitute an indispensable element in the process of human interaction. The most elevated form of interaction is the Hewar (dialogue) between two—or more—seemingly disparate and unique points of departure, with the goal of reaching a common human ground.

It is in light of this simple philosophy of the indispensability of Hewar, that the ensemble Hewar (Dialogue, in English) was conceived. Hewar was formed by a group of young and established Syrian musicians imbued with a sense of an urgent cultural mission, creative motivation, and openness.